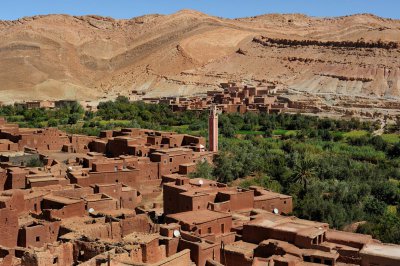 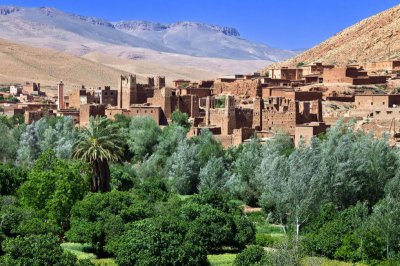 Early in the morning, you get the departure from Marrakech crossing the magnificent sightseeings and landscapes of The Highest Atlas via the Tichka Col (2260) to "Telouate Kasbah" , which was Pacha El Glaoui's ex-hostel. Such Kasbah reflects the feudal era in Morocco. After that, we take " Ounila "valley's road ,which used to be caravans' alley , down to Ait Ben Haddou Kasbah which is classified as an international patrimony of humanity by the UNESCO. Ait Ben Haddou Kasbah was also a plateau / location to many international films like "Nile Diamond", Alexander the Great....etc. Then, we carry on the journey to Ouarzazate to spend the night at "kasbah Dar Chamaa".

We get on the road early in the morning to Skoura Oasis to make a visit to "Amerdile Kasbah " . The Thousand Kasbahs' road is taken as soon as we leave Skoura heading for El Kelaâ M'Gouna, the capital of flowers .Then, we ,altogether, make an excursion to Dades Canyons and then to Boulmane . You will appreciate the charming canyons once we arrive at Todra Valley in Tinghir ( Todra Canyons are 15 km away from Tinghir) where you have lunch . In the evening, we leave Tinghir to Erfoud city crossing Tinjdad and Touroug palm trees .In Erfoud , you can make a visit to fossil marbles’' workshops. Next , we carry on the journey to Merzouga. After arriving at Merzouga dunes (Erg Chebbi) , you can ride camels to witness the charming Sahara sunset and spend a night in a luxurious Amazigh bivouac after having dinner.

The departure to Tafilalet palm groves is in the morning passing by Rissani city (Hometown of Alouite Dynasty and the royal family) where you make a visit to Moulay Ali Cherif mausoleum .Then, we keep on the journey to Alnif to have lunch there so as to head for Zagora to dine and spend a night there .While on the road , we pass by Tazarine ,N'kob and Tansikht crossing the magnificent Draa valley with its attractive palm groves.

After having breakfast, we quit Zagora to Ouarzazate crossing the glamorous Draa Valley ( Draa River is 1200 km long and considered as the Moroccan Mississippi river with 3 millions palm trees) through the Amazigh village of Agdz and the Anti-Atlas (1660m) .In the evening, we travel to Marrakesh through Tizi-n-Tichka pass.