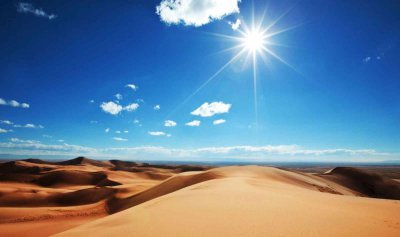 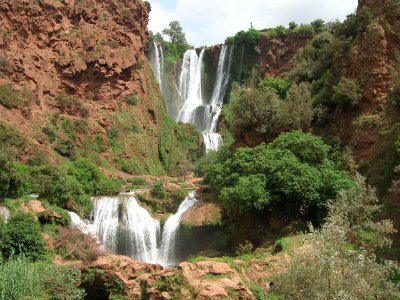 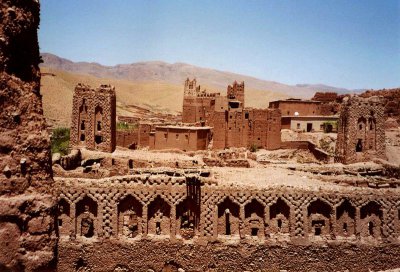 You get the departure from Marrakesh to Ouzoud crossing Atlas after passing by "Tamelalet" and "Attaouia". After passing through earthy-yellow Amazigh villages scattered on verdant mountainous landscapes , we arrive at Ouzoud Waterfalls (1495 m) so as to take a wonderful walk through out the valley.

We leave Ouzoud Waterfalls to Imilchil passing by Ben Louidan (25 km away from Ouzoud) and its great dam. Next, you will appreciate the crossing of Tizi-n-Isli Col. The itinerary passes through The Middle Atlas leading to high plateaus of the oriental Atlas indicating the two lakes: Isli (The groom) and the Tislit (The bride).We're ,then, in Imilchil which is said to be a Kasbah identifying Ait Ben Hididou territory or nomadic tribe. The region is nicknamed as "Small Tibet" and it's known for an annual festival of marriage taking place at the end of august. The night is spent there at "Auberge Bérbère".

Left to Goulmima, we cross Agdal (a grassland) to Ait Hani to take a break at .Next , we head left through out a number of villages and canyons for Ghris Oasis with its productive palms and olive trees. We spend a night at " Maison d'hôte l'Oasis" in Goulmima.

The next day, we quit Gulmima to the saharian city of "Rissani" crossing magnificent landscapes. Next , we keep on the journey to Merzouga.After arriving at Merzouga dunes (Erg Chebbi) , you can ride camels to witness the charming Sahara sunset and spend a night in a luxurious Amazigh bivouac.

After leaving Merzouka to Tinghir, you can make a visit to Toudra Canyons and the nearby palm groves .Then; you spend a night there at" Hotel Dar Ayour".

You get the departure from Tinghir to Dades valley and Dades Canyons crossing Ait Youl to join the Roses Valley and to arrive at Ouarzazate, where you spend a night at "riad Dar Chamaa".

This morning after breakfast you may visit the Atlas films Studios before we head to the village of Aït Benhaddou, a UNESCO World Heritage Site where you will visit the exotic Kasbah named after it. This Kasbah is situated on a hill along the fertile Ounila River; it becomes famous due to its role in hosting numerous films such as: The Man Who Would Be King, Jewel of the Nile, Jesus of Nazareth, The Message, Lawrence of Arabia, The Mummy, and Gladiator. Later on, continuing our off roads drive to Telouet. You will have a break for lunch then visit the incredible Kasbah of Telouet .Afterward we continue across the Tizi-n-Tichka Pass (2260m). Stopping along the way for photos and enjoying the panoramic views of High Atlas Mountains along with Berber villages located alongside the road. Arrive to Marrakech. Enjoy your Dinner and spend the night in hotel.